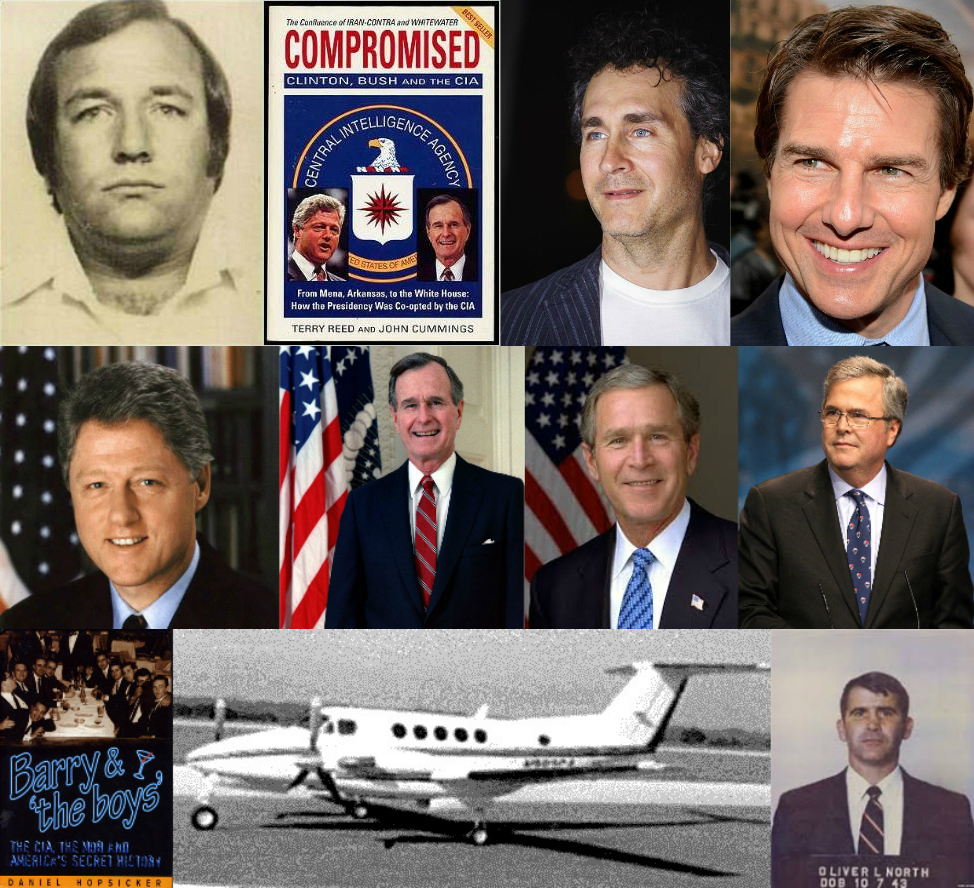 (1776 Channel) — Hollywood actor Tom Cruise is reportedly in talks to portray hefty renegade drug pilot Adler ‘Barry’ Seal, a central figure in a true story that involves one of America’s darkest secrets since the Kennedy assassination: CIA-sanctioned cocaine import/weapons export smuggling between Central America and Arkansas during the 1980s Iran-Contra affair. The project, tentatively titled Mena, will be distributed by Universal Pictures and directed by Doug Liman of Bourne Identity fame.

This studio theatrical release of the Barry Seal story featuring A-List actor Cruise could spell disaster for the 2016 presidential campaigns of Hillary Clinton and Jeb Bush if the producers choose not to expunge politically explosive details from Seal’s clandestine life.

Governor William Jefferson Clinton (husband of Hillary Clinton) is alleged by an FBI/CIA whistleblower to have protected Seal’s Mena, Arkansas air base and flight operations and to have subsequently received quid pro quo CIA support that secured his meteoric rise to the U.S. Presidency.

Seal is alleged to have blackmailed Vice President Herbert Walker Bush by threatening to release surveillance video of brothers George Walker and Jeb Bush using the family’s Beechcraft King Air turboprop to accept delivery of two kilos of cocaine during a 1985 DEA drug sting at an airport near Miami. Seal was brutally assassinated by members of the Medellin Cartel in Baton Rouge, Louisiana a short time later. Some reports claim that Seal’s body was found with Vice President Bush’s personal phone number still in his wallet.

Barry Seal was a talented pilot who worked for TWA during his 20s. Seal later set up his own flight operations base at a remote airport in tiny Mena, Arkansas using several airplanes equipped with state-of-the-art radar and encrypted communication systems.

A U.S. intelligence community whistle blower as well as several investigative journalists concede that Seal used his base in Mena at the behest of the CIA to import cocaine to the U.S. and export untraceable (no serial numbers) heavy weapons to Honduran-based Contras engaged in a guerilla war against communist Sandinistas in Nicaragua. The CIA denies those allegations.

This controversial history was revealed by former FBI counterintelligence and CIA asset-turned-whistleblower Terry Reed, who served in U.S. Air Force intelligence in Vietnam and later wrote a book called Compromised: Clinton, Bush and the CIA. Reed is also a skilled pilot and claims to have flown with Seal aboard clandestine flights. Reed described Seal as his CIA handler. Reed also came into contact with a fellow Vietnam veteran who would become a central figure in the Iran-Contra Affair: U.S. Marine Lieutenant Colonel Oliver North.

The wider Iran-Contra affair encompassed an array of covert operations in Central America and the Middle East which were directed by the National Security Council during the Reagan Administration and not authorized by Congress.

Barry Seal allegedly boasted possession of the ultimate blackmail ‘insurance’ to dig his way out from a slew of criminal charges and IRS liabilities levied against his multimillion dollar drug smuggling profits: surveillance video proving that George W. Bush and his brother Jeb flew from Texas aboard the Bush family‘s King Air turboprop and landed at a small airport near Miami where they subsequently accepted delivery of two kilos of cocaine. The young Bush brothers apparently didn’t realize that they were flying directly into a DEA sting operation while the DEA seemingly lacked advance intelligence alerting the agency that these wealthy ‘customers’ were actually members of one of America’s most powerful political families.

Terry, I’ve been working with several federal
agencies,” Seal began. “In the course of that business,
a person can’t help but run across some *very* sensitive
information. It seems some major players in the Medellin
cartel, whom I personally know, ran across some
knowledge that’s very valuable to both Republicans and
the Democratic party. It seems some of the, George
Bush’s kids, just can’t say ‘no’ to drugs. A guy in
Florida, who ‘flipped’ for the DEA, has got the goods on
the Bush boys. Now I heard this earlier from a very
reliable source in Columbia. But I just sat on it then,
waiting to use it as my ‘trump card’. I got names,
dates, places, even got some tape recordings. I even got
surveillance videos catching the Bush boys red-handed. I
consider this stuff *my* ‘insurance policy’. It makes
me, and my ‘mole’ on the inside that’s feedin’ the stuff
to me, invincible. – Excerpt from Compromised: Clinton, Bush and the CIA

By the time the DEA and FBI realized that the cocaine buyers just snared in this sting operation were Vice President H.W. Bush’s sons, surveillance video had already been recorded. The investigation was subsequently buried: the whereabouts of the video evidence and any paper DEA and FBI records remain unknown.

Seal is alleged to have later blackmailed Vice President Bush, threatening to go public about the catch-and-release DEA sting that snared G.W. and Jeb as well as details of the wider Iran-Contra operations if the Vice President didn’t get the IRS off of Seal’s back, Reed claims.

Shortly thereafter, Seal was assassinated on February 19, 1986 by the Medellin cartel. Some researchers have speculated that the hit was ordered by the Bush family and/or Oliver North.

It has been reported that Vice President Bush’s private phone number was found with Seal’s body after Seal was gunned down while sitting in his Cadillac outside a Baton Rouge, Louisiana Salvation Army halfway home where he had been residing under court order. The legal restriction on his movements left Seal a sitting duck for assassination. He left behind a wife.

Investigative journalist Daniel Hopsicker also has chronicled much of the Mena story and self-published a book about Seal called Barry & ‘the boys’: THE CIA, THE MOB AND AMERICA’S SECRET HISTORY.

Hopsicker has also investigated and written about the backgrounds of Mohammad Atta and other alleged 9/11 hijackers and their connections to a similar clandestine drug smuggling operation based out the Venice, Florida airport, where the hijackers received flying lessons.

The timing of the film’s release could become an edge-of-your-seat political thriller just as engaging as any Miami Vice style screen action: If the film publicly connects the Clinton and Bush families to 1980s cocaine trafficking amid the run-up to the 2016 presidential election, that could serve a devastating blow to both the Jeb Bush and Hillary Clinton campaigns. Although the project appears to be moving steadily forward, principal photography has yet to begin.

A more sanitized and whitewashed version of events in Barry Seal’s life, on the other hand, might keep audiences entertained and fill box office coffers while shielding America’s Democratic and Republican royal families from a direct hit.

Universal’s legal team will likely have a say in what content makes it into the final cut of the film. And others.

The 109 minute film highlights Seal’s transition from an outlaw drug pilot to a star informant who risks his life for the DEA and CIA. Seal provides the CIA with photos of communist Sandinista regime leaders loading drugs onto his plane, an intelligence coup which Oliver North subsequently leaks to the Washington Times. The cartel places a bounty on Seal’s life. When the DEA fails to show up at a Louisiana court hearing to testify on Seal’s behalf, a local judge orders Seal to report daily to a job at the Baton Rouge Salvation Army. The judge also denies Seal all forms of armed protection. The judge’s sentence is essentially a death sentence for Seal.

The film concludes with a clip of President Reagan showing the American people a photo taken by Seal of the Sandinistas loading a C-123 plane. Although Seal has already been assassinated. the President does not mention Seal’s name.

The producers of Mena have at their disposal politically sensitive details about Seal’s life that the creators of Doublecrossed did not. The publication of Compromised was a game changer that the next generation of Hollywood filmmakers cannot afford to ignore. If Liman, Cruise and the studio choose to detour the politically dangerous elephants in the room which comprise Seal’s life story as it is understood post-Compromised, they risk appearing dishonest or COMPROMISED themselves.

The enormity of the responsibility resting on the shoulders of Hollywood right now cannot be underestimated. As Mena enters the production cycle, Hollywood will have to examine itself.

If the powerful (some insiders would argue dangerous) Clinton and Bush political machines are rewarded with a Wiffle ball movie that ignores Clinton’s protection of Seal’s CIA activities and Reed’s claim that Seal knew about the Bush brothers DEA sting, the country will be worse off than before Universal optioned the screenplay.

Last year saw the theatrical release of Kill the Messenger, a movie based on the life of San Jose Mercury News investigative reporter Gary Webb, whose groundbreaking research in California and Nicaragua led to the publication of the infamous Dark Alliance exposé. In a series of front-page exclusives, Webb uncovered how CIA-endorsed trafficking of cocaine from Nicaraguan contras to San Francisco, California was fueling the 1980s crack cocaine explosion in Los Angeles.

Webb’s findings in Nicaragua, which led him to the name Oliver North, were relentlessly attacked by the New York Times and Los Angeles Times, destroying his marriage and his career. Webb eventually committed suicide by way of two gunshots to his head; an improbable event many speculate was a murder. A professional firearms instructor contacted by 1776 Channel states that the likely of someone shooting themselves twice in the head, even as the result of a weapon malfunction, was ‘close to zero’.

Mena is not the first time Tom Cruise has waded into controversial subject matter. The actor starred in Stanley Kubrick’s Eyes Wide Shut, which features a secretive orgy sex scene involving high-society elites and expensive prostitutes. The scene takes place at a New York City area mansion where all the participants don masks to conceal their identities. Some have suggested Kubrick was portraying a closely-guarded ritual of the Illuminati. Kubrick died during the final stages of post production and never saw the final release. Some speculate Kubrick was murdered. Others maintain that the seventy year old genius simply worked himself to death while perfecting his final opus.

Ron Howard was originally slated to direct Mena, but was reportedly replaced by Liman. The screenplay, penned by Gary Spinelli, was sold to Universal in a one million dollar spec deal preceded by an intense bidding war.