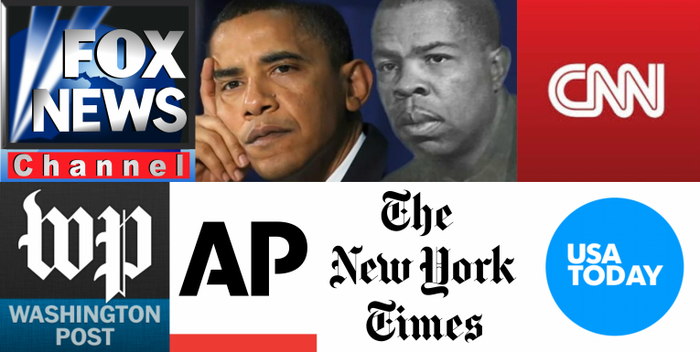 (1776 Channel) Major cable and network news channels, print media and affiliated internet news outlets in the United States appear to be ignoring a recently unearthed video from 1995 in which Barack Obama confirms that “Frank” from the book “Dreams from my Father” is indeed Frank Marshall Davis.

The video is important because it is the first known recorded admission made by Barack Obama that he was influenced and mentored by Frank Marshall Davis.

Frank Marshall Davis was a community organizer and Communist Party USA member who was tracked by the FBI during the cold war. Some historians suspect that Davis had ties to Soviet KGB agents. It has even been speculated that Davis may have been a KGB agent himself, assisting the Soviets in engineering a Hawaii coup which could convert the cluster of Pacific islands into a Soviet satellite similar to Cuba.

Numerous references are made to “Frank” in Obama’s autobiography “Dreams from my Father” but those references were omitted from the CD audio book version.

The 57-minute-long video of Barack Obama discussing his book was recorded on September 20,1995 at the Cambridge Public Library in Cambridge, Massachusetts. The tape aired during a program called “The Author Series” broadcast locally on Channel 37 Cambridge Municipal Television.

The video emerged on the internet nearly 20 years later on March 12, 2015 when it was posted to the official YouTube channel of the City of Cambridge Municipal Television Channel 22, known as CityView.

The New York Times, during the 2012 campaign season, used the phrase “implausible theory” to describe speculation that Frank Marshall Davis is Barack Obama’s father and that he had indoctrinated the future president.

The 1995 video of Barack Obama admitting that Frank Marshall Davis had “schooled” him on the subject of race relations proves that the New York Times got the story about Obama’s indoctrination wrong.

It remains unclear whether or not Frank Marshall Davis is Obama’s father.

The New York Times has yet to issue a correction, or even mention the new video.

“Davis made an impression on Obama, as shown in his memoir. Obama mentions Davis several times in “Dreams from My Father” as someone who influenced his understanding of his black identity. But there is no evidence Obama was “raised” by Davis, or that Davis remained a close Communist mentor who advised him throughout his life. We carefully considered the facts underlying this assertion, and the evidence is slim. We may never definitively know one way or another, but it is time to put it to rest” (emphasis added). – Michelle Ye Hee Lee, Washington Post, March 23, 2015

The Washington Post has yet to report on the newly unearthed video.

1776 Channel has not been able to find any evidence that CNN has covered the 1995 video in which Barack Obama mentions Frank Marshall Davis.

The same came be said for Fox News and the big three network news channel.

Google News and Bing News searches reveal just how scant coverage of the story has been.

World Net Daily (WND), American Thinker, and Western Journalism are among the few media outlets indexed by Google News which are covering the story of the newly revealed video.

Alex Jones of Infowars, which was removed from the Google News search algorithm several years ago without explanation from Google, as well as Jim Hoft of The Gateway Pundit, did cover the Obama Cambridge video story.

Preliminary searches of the official websites for conservative radio talk show hosts Rush Limbaugh and Sean Hannity, both of whom have frequently linked Barack Obama to Frank Marshall Davis in past broadcasts, suggest that Rush and Hannity have yet to cover the Obama video story.

1776 Channel was unable to find any evidence that the White House press corp has asked White House Press Secretary Josh Earnest to comment on the video.

The reality for the millions of Americans who rely solely on major media outlets for their news remains as follows: Video proof that President Obama confessed that Frank Marshall Davis indoctrinated him simply does not exist.