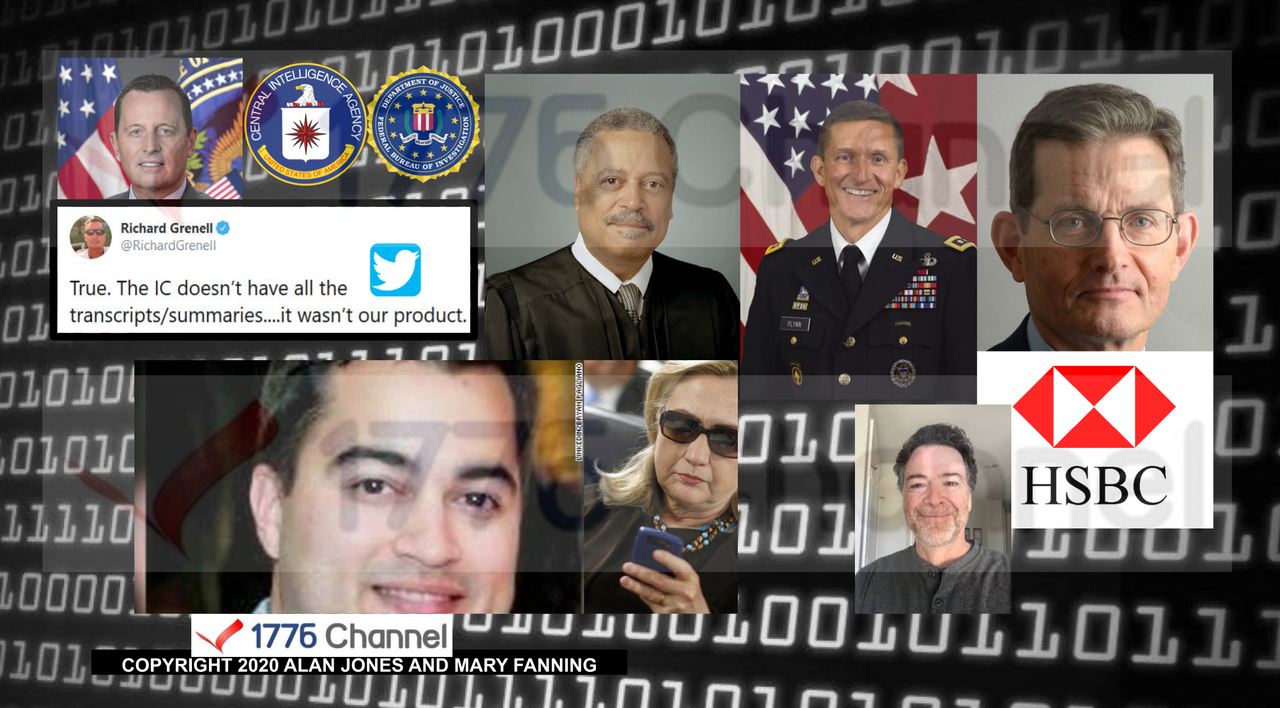 The Justice Department and the FBI knew by 2017 that there was no Trump Russian collusion.

As the cabal’s uncontrolled brush fire burned through America’s body politic in a scorched earth plot to divide and destroy the United States and bring down the Trump administration, the coup plotters and the media carried on the despicable charade of the vile Russian collusion hoax.

On May 17, 2017, without predicate or evidence of any crime, Rosenstein appointed Robert Mueller as Special Counsel to lead the hoax Trump Russian collusion investigation.

Two days later,  FBI Deputy Assistant Director of the Counterintelligence Division Peter Strzok infamously texted his main squeeze Lisa Page five words that summed up what the coup plotters knew all along: “There’s no big there there.”

On July 17, 2017, former Director of National Intelligence James Clapper testified under oath during a classified interview before the House Permanent Select Committee on Intelligence that “I never saw any direct empirical evidence that the Trump campaign or someone in it was plotting/conspiring with the Russians to meddle with the election.”

Yet Clapper, from his perch at CNN, continued to vociferously attack President Trump as a traitor and agent of Russia. CNN and James Clapper worked in concert to spread lies to the American people in an unprecedented attack against a sitting United States President.

They went after General Flynn in order to get to President Trump.

Former CIA analyst Fred Fleitz, who served on President Trump’s National Security Council, wrote in an April 22, 2020 Fox News opinion piece that “House Intelligence Committee staff told me that after an exhaustive investigation reviewing intelligence and interviewing intelligence officers, the found that [CIA Director John] Brennan suppressed high-quality intelligence suggesting that Putin actually wanted the more predictable and malleable Clinton to win the 2016 election. But they lied about that.

It was one filthy lie after another.

Former members of the Obama administration, Congressional Democrats, and the corrupt mainstream media attempted to impeach President Trump. Many feared that if President Trump wasn’t removed from office, they would have to answer for their many crimes.

“After the election, even though they were closing down some of it as we’ve seen in the [General Michael] Flynn case and saying ‘there’s nothing here,’ for some reason they went right back at it even at a time where the evidentiary support or claimed support like the dossier was falling apart,” Attorney General Barr explained during a Fox News interview.

“For the first time in American history, police organizations and the national security organizations were used to spy on a campaign, and there was no basis for it,” Attorney General Barr continued. “And then later on, in his administration, there were actions taken that really appear to be efforts to sabotage his campaign.”

“We are no longer at the point … where it is Rupublican versus Democrat. This is now Washington versus the rest of America,” former Acting DNI Richard Grenell explained during an interview last week.

Richard Grenell revealed that the intercepts of the December 29, 2016 phone calls between President Trump’s incoming National Security Adviser Lt. General Michael Flynn and Russian Ambassador Sergey Kislyak were not the “product” of one of the 17 U.S. intelligence agencies that Grenell oversaw. Those agencies include the FBI, NSA, and CIA.  Grenell definitively stated “it wasn’t our product.”

“The IC [Intelligence Community] doesn’t have all the transcripts/summaries….it wasn’t our product” Grenell elucidated on Twitter.

Who’s Product Was It? Who Spied On The Former DIA Director?

Whose product was it? And who provided that “product” — the surveillance data on President Trump’s incoming National Security Adviser General Michael Flynn — to President Obama?

Was It THE HAMMER?

According to CIA contractor-turned-whistleblower Dennis L. Montgomery, the Obama administration used THE HAMMER to conduct illegal domestic surveillance on 156 Article III Judges and other U.S. officials.

Was it THE HAMMER that was spying on General Flynn?

Montgomery stated that President Obama had an encrypted VPN and could access THE HAMMER at will.

John Brennan and James Clapper illegally commandeered the foreign surveillance system THE HAMMER and moved it to the Fort Washington Facility in Maryland on February 3, 2009, where they illegally spied on Americans, including President Trump and General Flynn, according to Montgomery.

Under President Obama, Brennan and Clapper used THE HAMMER to conduct illegal domestic surveillance on Barack Obama’s political enemies and members of his own bureaucracy, for the purposes of “blackmail and leverage.”

John Gleeson, the former U.S. District Judge that Judge Emmet Sullivan, in an unconventional maneuver without precedent, brought in to prevent the DOJ from dismissing General Michael Flynn’s case, was an Article III judge.

Judge Sullivan Refuses To Give Up The Ghost

Yet, U.S. District Judge Emmet Sullivan refuses to give up the ghost as he attempts to entrap General Flynn for a second time.

Judge Sullivan is attempting to play the role of judge, jury, and prosecutor and convict General Michael Flynn after the United States Justice Department dropped its Trumped-up prosecution.

Judge Sullivan had already veered outside of his authority when he had the temerity to call General Flynn, a highly-decorated war hero who served his nation for 33 years on active duty, a “traitor.” Not only is there no evidence to support that charge, but Judge Sullivan’s outlandish statement exposes his own prejudice.

Judge Sullivan doubled down when he accused General Flynn’s lead counsel Sidney Powell of “plagiarism” when she was referencing her own work.

Oddly, President Obama emerged from the shadows to falsely claim that General Flynn had committed perjury. On cue, Judge Sullivan refused to dismiss the Flynn case that the DOJ had already dropped. The Wall Street Journal, like others, wondered exactly what former President Obama had to fear.

A plethora, in fact an avalanche, of criminal activity occurred under the Obama administration, including within the Justice Department, the FBI, and throughout the Intelligence Community. Under the thuggery exhibited by the Obama administration, one might have thought that they were living in the Soviet Union. It wasn’t happening in just one agency. It was happening in every agency, from the CIA, to the IRS, to the EPA. Corruption was the order of the day — every day.

Judge Sullivan covered up these illegal acts when, according to Politico, “Sullivan declined to make Pagliano’s immunity agreement public.” Sullivan also sealed Pagliano’s videotaped deposition. Further, Pagliano skirted the law with impunity when he defied a Congressional subpoena by skipping a required appearance before the U.S. House of Representatives.

Judge Gleeson also had oversight of the HSBC case connected to James Comey. Comey, after all, is the one who claimed that Hillary Clinton committed no crimes with her illegal server because she had no “intent.” Intent, however, is not a requirement for conviction in national security cases involving exposure of classified information.

In July of 2013, Judge Gleeson approved a $1.92 billion deferred settlement in HSBC’s money laundering case involving Mexican drug cartels and terrorists, “which enabled HSBC to escape criminal prosecution” according to Reuters. HSBC conducted “transactions on behalf of customers in Burma, Cuba, Iran, Libya and Sudan, which were all subject to U.S. sanctions.” Iran and Sudan, adversaries of the United States, have produced weapons of mass destruction.

In March 2013, while Judge Gleeson was reviewing HSBC’s deferred settlement proposal, HSBC appointed James Comey to its board of directors. Gleeson’s decision was tantamount to protecting the rogue financial networks of terrorists who produce WMDs.

In the Flynn case the original FBI Form 302 reports of Strzok and FBI Special Agent Joseph Pientka’s ambush interview of General Flynn also went missing. Those 302 forms were then altered by Strzok and Page in order to frame General Flynn.

Page was recently awarded with a new on-air gig at MSNBC alongside fellow cabal member Andrew Weissmann. Seemingly, treason and sedition are sought after resume builders following service to the Obama Administration, proving that crime does indeed pay.

General Flynn knows the truth about the Obama administration’s willful decision to arm ISIS terrorists and intricate details of the Iran nuclear deal. General Flynn also understands his way around the Intelligence Community.

Members of the former Obama administration have a strong motive to keep General Flynn muzzled.